Though it borders the Adriatic Sea, Abruzzo is defined by the Appenine range, a steep mountainous terrain that isolates it from neighboring regions. In combination with Molise-a smaller, adjacent region-the area is the fifth most productive for wine in Italy. Abruzzo produces nearly double the amount of wine as Tuscany despite having half the amount of vineyard area. This is due to the highly effective tendone trellis system, which creates an expansive canopy that allows the vines to form an overabundance of grapes. Although many wine critics describe the wine producers in the region as mezzogiorno, translated as “midday” but meaning “low quality,” the bulk of the wine produced here has long been shipped to northern Italy and France for blending purposes. Plus, new advances in viticultural techniques and subsequent improvements in quality are elevating its status. Generally speaking, the northern part of Abruzzo-where the Appenines run along the Adriatic-is considered the most prestigious growing area due to its higher elevation, cooler temperatures, and soil composed of ferrous clay and limestone. The southern, more fertile part of the region is defined by rolling hills and river valleys, and is responsible for the bulk of production thanks to richer soils, a warmer climate, and more workable terrain. The region has been divided into 4 DOC zones: Controguerra, Montepulciano D’Abruzzo, Montepulciano D’Abruzzo Colli Termane, and Trebbiano D’Abruzzo. In any case, the region promises quality wines at reasonable prices. 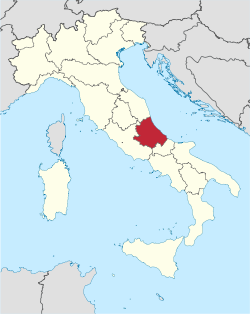